Tuesday is therapy day. We arrived a little early this week, and Mae decided to walk down toward the classes. After all, she was turning two, isn't that where big kids go? I picked her up and started back toward the waiting area when a woman stopped to say hello. We chatted and she asked how old Mae is. "She's going to be two tomorrow." I said.

"Oh, is tomorrow your birthday?" she asked Mae. Mae nodded and held up fingers like we had practiced. "Oh my! She really understands us!" the woman exclaimed.

When I was told by parents in the Ds community that Mae would understand the world around her, I didn't really believe them. I thought she would understand things...to a point. I really had no experience with intellectual disability and thought this was the rosy picture that people in denial painted to make our kids seem more like typical kids. I am too pragmatic to bother with denial and I loved my child for who she was, not what I wanted her to be. I laugh at myself now. Mae does understand everything. She doesn't have an input problem, she has an output problem. Sometimes the problem is that she is naturally contrary. Sometimes it's because she can't get at the response in her brain. Sometimes the motor planning isn't working. Sometimes she's just not patient enough to try and wants to do things her own way. Sometimes she has just checked out from sheer exhaustion.

I don't think it's any accident Mae was born on March 5th. It's the national campaign for "Spread the Word to End the Word." It's no secret that I don't love this campaign. But the reason is not because I have some warped view of the first amendment, it's simply that while words matter, so do attitudes. People no longer have any reason to use the words "retard" or "retarded", and most certainly deserve a dressing down for using "-tard" as a suffix. What the use of this word reveals is ignorance or, worse, callousness. It's the callousness that is the greater battle, the battle that seems too big to be won.

On The Tonight Show with Jimmy Fallon, Jerry Seinfeld made a jokes about the USPS. Included in his set was an insult about the "mentally handicapped cars" they drive. Now replace "mentally handicapped" with "retarded". Is it still funny? If you have a person with an intellectual disability that you care for both versions cut deep. We are not a humorless people either. In fact, humor is sometimes the only way to stay sane in the world of possible outcomes and exhausting rituals. Scott and I have our share of inappropriate jokes that are funny only because we are in the trenches of raising 5 young kids. (I swore I'd never make a poop joke, and I lasted about 4 days into parenthood.) I'm sure when they are teens we will have more material to keep us from developing some kind of nervous disorder.

It isn't that life shouldn't be made into a joke, and it isn't that we are delicate little china dolls. It's that the people we care for hear and understand that you are using something that is true about them to disparage something or someone else. These people that we love often cannot debate the issue for themselves. Some can write letters, but in this world of immediacy, no one has the time to wait on a response from someone like Mae. They've all moved on. How can anyone in good conscience feel good about using a word that describes something that is true about one person as a generalized insult?

My oldest is in fourth grade. This year she took it upon herself to work to educate her school mates on what Down syndrome is and what it means. She did so because some kids were using the word "retard" to make fun of each other. We recently sat down to talk a bit about respect and humor. I asked her if any of the kids in school use the words "gay" or "homo" as insults. She said, "Yeah, mostly it's boys." I explained that Kate should feel the same way about those words as she does when kids call each other "retard". I explained that there are people in the world to whom those words apply and that it isn't fair to turn an adjective that describes someone into an insult. "What if instead of the word 'gay' you heard 'retard'. How would you respond?"

"That's not okay, Mom. I would have to tell them to cut it out."

"Good. You should feel the same way about using those other words like that."

As adults we understand that throwing around words that describe homosexuality as an insult is unacceptable behavior. While we may disagree on the morality of such issues, most of us get that we are talking about human beings and need to be careful and considerate. Now what if you got as upset at the use of descriptors for the intellectually disabled as insults as you do about the words "gay", "homo" and "fag"? I guarantee Jerry Seinfeld wouldn't use those words on The Tonight Show. If he did he would never hear the end of it from the public. Somehow, making fun of our loved ones goes unnoticed.

The world doesn't love Mae. The world doesn't respect her. Some give her a pass because she is functioning well, but should that slow down, she will be dismissed like so many others like her. In Belgium she would be allowed to request to be euthanized. Our family would be denied citizenship in New Zealand because of Mae. In our country conservatives see her as a Taker because we get publicly funded services, liberals treat us like we've sentenced her to life and criticize us for not terminating her while I was pregnant. Strangers look at her face and say, "You're done now, right?" Comics use words that describe her as a punch line. Yet with all of that, our lives are better for having her there.  It would be a whole lot better if we stopped insulting people like her and began appreciating them for who they actually are. 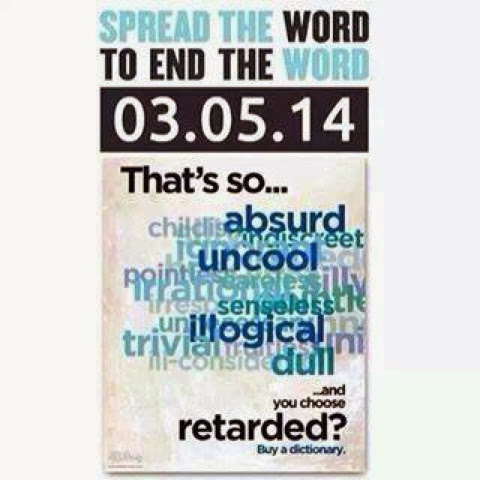 Posted by Barbara Fryman at 8:25 PM

Email ThisBlogThis!Share to TwitterShare to FacebookShare to Pinterest
Labels: down syndrome awareness, Spread the Word to End the Word