--- 1 ---
I hate "Whatever Awareness", or rather I did. I never saw the point. I thought, "How about forgoing awareness and putting that money into actual aid to those suffering?" Now I'm on the awareness bandwagon. Because people need to know you won't die from having a baby with Down syndrome and that making decisions out of fear is really just a good way to cheat yourself from a fulfilling life. And that's just Down syndrome. There are a lot of things we all need to grab our attention. So, be aware, be very aware!

--- 2 ---
Lately I've really taken account of my appearance. It really started when I was describing to my kids about the connection between the body and the soul. And I realized, while there is a time to let vanity go, there is also the need to retain a sense of self and glory in your outward appearance. If you are ashamed of your appearance you are not going to be fully yourself. So I am taking small steps to reclaim my appearance. My hair appointment is next week. It seems like vanity, but it is deeper than that. I must feel whole to be holy, and part of that is feeling worthy of time and attention. Lately everything else comes first, and that's okay. It just can't last. And let's be real, I'm not shooting for gorgeous, just pleasant.


--- 3 ---
BEGIN RANT
We live in an increasingly disordered world and I'm flipping tired of it. Weekends of football on T.V. all day long are no longer the norm around here. For the last 5 years we've needed, yes needed, TiVo in order to watch anything on television, including football during the day. Why? Because executives seem to think it appropriate to air commercials for horror movies during the day, during "family viewing". This, my friends, is utterly disrespectful.

I'm so disgusted by the lack of respect for children in our culture. Hey, you want to make a horror movie? Great! If it's a good story I might go see it. You want to have a strip club? Well, I don't like it, but I'm not going to march outside your doors either. You want to advertise your beer during the day? Okay, I'll probably buy it with or without your ad, but whatevs. You want to throw gore and breasts in my kids' faces to get my business? Wrong answer.

It's not just ads, of course, though there is a local billboard in particular that I'd like to beat with a 9 iron. It's the whole "Teach your Baby to Read" mentality that disrespects child development. Mariana could roll over at two weeks, but she did it incorrectly, and I had to go back and show her the "right way" so that her development was ordered toward her benefit and not detrimental. There is an order to life and to development that needs to be respected, but I see that in our pursuit of what we as adults want, we leave behind what kids need.

Life is like math, kids need to know how to count and what a number is before they can be taught addition. What sense does it make to throw images of lust and horror at our kids when they are still learning the ins and outs of basic life? Does no one recall how wonderful it is to enjoy the box before we even remember a toy came inside?

So, stop it you dumb advertisers. I don't want to see any more gore or sex during the weekends. I want to be able to turn on the football game and walk out of the room without having to pause. I want to drive down the highway without 9 foot women baring their goodies. And I have no interest, and never have had an interest in teaching my baby to read!

--- 4 ---
Sorry about that last rant, but not really. Back to my fabulous life with Mae. She is cracking me up/making me crazy. She still won't nap in her bed, but in the exer-saucer/jumper toy? 2 solid hours. Though, in her defense, when she was startled awake by her brother screaming, "MARIANA IS SLEEPING." right by her ear, she was able to bounce herself back to sleep. So, that's something.

--- 5 ---
We are closing on the house next Friday. Fear and loathing about the upcoming move is threatening to take the fun out of this adventure. Also? the punch list. It is no fun to go through your dream house pointing out all the flaws. In my fantasy world I would sit the builder down and explain, "This is my dream house. You have eyes, so you go through and fix all the problems, make it perfect and quit ruining my fun." And then he does it. As I said, my fantasy.

--- 6 ---
This weather is the bomb. It's cool in the morning, warm during the day and cool at night. It smells like fall, but doesn't require many added layers. The children can play outside all day, and then come in smelling like clean air. The windows were open all day yesterday. If I could, I would hug this weather.

In honor of DS awareness month, here is a shout-out to my husband. I have received a lot of complements on how well I am doing with Mae's diagnosis. One friend asked, "Don't you feel chosen?" as in, favored by God. I must admit the question bewildered me because while I have always seen our girl as the best gift from heaven, I never ever thought it was because God thought I was anything great. It's more like I saw God as the teacher who sees a kid not living up to his potential and giving him cool extra projects so that he does better all around. Or put another way, God was saying, "You can do better Barbara, here's your chance."
But my husband I see differently. If ever I thought Mariana was a reward for goodness, it would be be because he earned it. Scott's the most unselfish person I've ever met. And while he'd argue with me about that, I have experienced first hand the depth of his unselfishness. So, for Ds awareness, let us never forget those wonderful dads who love their babies to the ends of the earth. Three cheers for them!
For more Quick Takes, visit Conversion Diary! 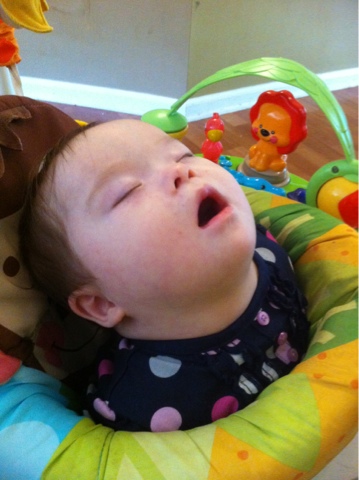 Posted by Barbara Fryman at 8:12 PM