This time of babyhood is the toughest for me. 5-6 months, when the baby isn't on solids yet, but is ravenous, add to that the 4 whole other young ones who need their mommy and the fact that we don't live near family and you get the perfect crap-storm of "WAAAAAAHHHH!" And this past week was terrifically awful since Mariana decided that this through-the-night sleep schedule isn't really working for her anymore.

And then yesterday happened.

Mariana woke up at 1AM, and I was tapped out. I just couldn't nurse her and I was out of pumped milk. I asked Scott to give her formula. When he put her back down I heard her cough, but I was tired and I fell back asleep. When she woke up she was coughing again. There she was, cheerful as can be, covered in vomit and poop. So I cleaned her up and nursed her and 10 minutes later she vomited again. I took the kids to school, started some laundry, and midday sat down to my blog to tinker. There is this thing that tells you where people come from to get to your blog, like if it's linked on Facebook. I clicked a link I didn't recognize. It was a graphic porn site. (Luckily, I think this is fixed and it's a fishing type mechanism that isn't reflective of an actual link to my blog on a porn site.) I picked up the girls from school, they ate a snack and started homework while Molly and Paul played and I began to fix dinner. Molly was supposed to have her first soccer practice that evening. All at once I heard a really loud thud and crying. Molly came out holding her head. When I took a look I saw a gash, and inside the gash, her skull. Next came interruption of Daddy's very important meeting, loading all the children into the car without having had dinner, trip in rush hour in the rain to the ER, Daddy bringing Molly in, a terrible trip home complete with the punishment of kids being sent to bed immediately after dinner.

1. Mariana's puke was not indicative of an allergy, but of being overfed because 6 oz of breast milk is much less dense than 6oz of formula.

3. Molly's practice was cancelled due to weather so she didn't miss it. Her injury was not as bad as it could have been. She has a Daddy that she wanted to take care of her, and he did.

4. Even though I was upset with the kids I stopped and got them cookies because I was given the insight to see this was tough on them too.

Though it's been a very hard week for us, I know God is here in every moment walking along side of me, sometimes dragging me in the right direction because in my heart I want that. My dad was telling me of a man he knows who is suffering greatly right now. This man is a good man with a deep and resounding devotion to the Rosary and the Eucharist. Dad relayed how when St. Teresa of Avila was being challenged she said to God in frustration: "If this is how you treat your friends, Lord, no wonder you have so few!" and how that reminded him of this poor man suffering.

Many times I've felt that way, but not today. Today I remember it isn't God who is doing all this to us. You see, I believe in Satan as a real being, and I believe he's a desperate sort. Time and time again when things are going rough, but my spirit isn't broken, they get worse. But this does not come from God, who is Goodness, it's someone who is angry he can't beat God. It's a tantrum being thrown because Satan sees us getting up after being knocked down over and over again. His fury is only intensified when we have the gall to use the very cross we're crumbling under as a crutch. I've noticed this pattern time and time again. When Scott goes out of town, it hits the fan at home. When the kids get sick, the weather is beautiful and when they are well again, it's bad.

While I don't think Satan is orchestrating the weather or illnesses in a direct way, I hear him whisper to me how unfair things are and tempt me toward despair. Why wouldn't he be enraged when I just let go and build a horrific messy fort in our living room on those stormy days? How dare I just make do with the circumstance? How could I?

Simply put, I can't. My secret is that I do give up. I'm not so tough, and I know that. It's relying on God that makes the insufferable okay. It's God who gave me a sense of humor about the ridiculousness of raising children. It's God who gave me sisters and friends who have shared experiences. It's God who gives me a community to rely on. It's God who points toward the putting back together and not the tearing apart. It's not the death, but the Resurrection: 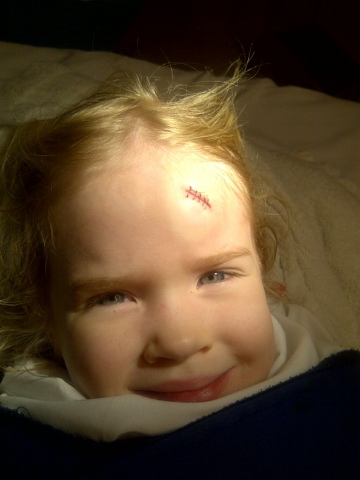 Posted by Barbara Fryman at 9:54 AM