I have had much to say, but a lacking desire to post it. So much has happened in the past two months that I do not wish to share only because I have been allowing myself and the family to process these things together. So, yes, I haven't posted, but I think those sabbaticals are something I will need to allow myself. This post has been rolling around my thoughts for a while, I hope it bears out well.

The background began last fall. My oldest girl came home unhappy about life and began to ask me about hair removal, specifically arm and eyebrow. A girl had pointed out to her that her arms and her eyebrows were, shall we say....generous. I have no way of knowing if this girl made a big deal of it or not, it really doesn't matter at this age anyhow. It stuck and thus the exploration of what I would allow her to do began.

I know kids, and I know my kid, so I had the conversation as though I was completely fine with it. (I was not. She was 9. What the heck?!) I explained that she could do as she liked with her arm hair when I wasn't paying for it, but that shaving it would cause whiskers on her arm. I offered her some Sun In and a hair dryer as a consolation prize, which she accepted gratefully. As for the eyebrows, I offered to pluck them.

"Terribly, though perhaps when you are older I will take you to get them waxed. That hurts also, but is much faster."

A few weeks ago the eyebrows came up again. Rather than force the poor thing into a dance with the devil, who would surly tempt her to pluck them behind my back, I offered to take her to a pro. If any of you are judging me harshly for this, I thumb my nose at you. I sported eyebrows shaped like sperm for a year because of my poor plucking skills, a fate I spared my daughter. I deserve a medal for that. (Incidentally, the woman who did the work was very good about only removing the extra growth under the brows, did nothing to shape them, and left them looking like the eyebrows of a little girl who is not especially hairy.)

As we drove to our appointment we began to discuss some of her social anxieties. These car rides with my children always bring forth such great conversations about life, this was no different. In regard to one girl in particular, she stated that because this girl is so admirable and likable my Kate used to want to be her. It made her feel anxious to be more like this girl, but now she just wants to be herself. It was as if the Holy Spirit dropped a script into my lap so that I wouldn't screw this up. Usually I would go on and on and on about "Be yourself! You are the best you!" Instead I went against type and asked her what caused her to change.

I began to string my next question slowly, as though I were luring a wild rabbit into my hands. "What is it about Mae-mae do you think that made you change how you....that made you want to be more yourself."

"She has to be happy just being herself, so I thought that maybe I should be happy with who I am. Maybe that is what we are supposed to do."

My soul leaped with joy in that moment. There was no self congratulatory feelings that we had done well as parents. Right then I saw the soul God Almighty designed, and right then I saw the absolute glory of being shown such a thing. If you knew her you would know how much she wrestled with self-doubt and how much she plays Peacekeeper. You would understand the profundity of such a statement. In that moment my daughter showed such beautiful receptivity to life lessons, such clarity on how to allow something to inspire, and a vulnerability without a hint of guile. Forget pretty, her whole being shone with Beauty.

This is the intangible about life that we try so hard to communicate to the world about our loved ones with Ds. Many of them won't ever leave home, make a great living, make any exciting discoveries, or even pay much in taxes. We need not act as though our loved ones count as much as the next person. We know it, we live it, we experience the change it brings forth. We become more human as we give more of ourselves to a future that is uncertain. We teach and teach and work and work and coax and coax in never ending hope that it will yield fruit, and it does, though it is a different fruit than we could have ever imagined. It is the fruit of a sweeter life, a kinder soul, a more compassionate nature. It is the fruit of loving more deeply and with less self interest. The good of the other becomes more in focus, almost surprising us out of our blinders we had worn unnoticed. It is the fruit of longing to become whomever you were all along, but somehow shut out of your life in pursuit of becoming whomever you wished to be.

C.S. Lewis wrote in The Abolition of Man about how education had become focused upon raising people to think without the being encumbered by morals and emotions. One of my favorite quotes of his was, “It is not excess of thought but defect of fertile and generous emotion that marks them out. Their heads are no bigger than the ordinary: it is the atrophy of the chest beneath that makes them seem so.”  His point was not some feel-good, "Follow your heart." philosophy, but that all the knowledge in the world is still lacking if we have no ability for compassion, love, understanding, empathy, grief and joy. This is what Mae brings to our family. She makes each of us better because she teaches us the importance of being beautiful rather than chasing the fickleness of looking so. 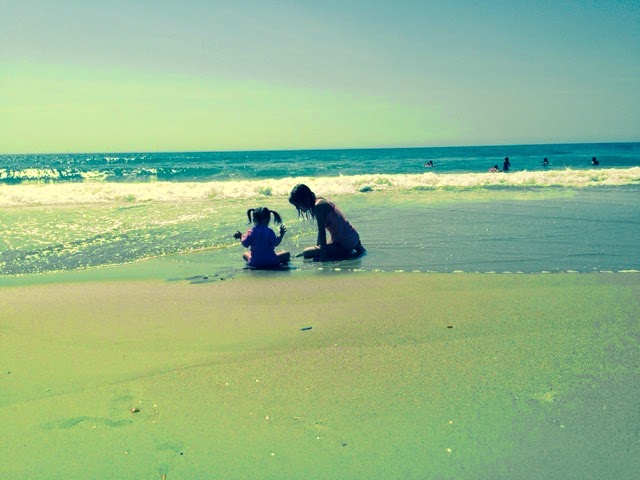 Posted by Barbara Fryman at 9:17 PM