--- 1 ---
Happy New Year.  2013 was a great year for us as a family. It's funny how I keep reading what a dud of a year it was, but how much I found it to be full of blessings. Perhaps the bad news made me more appreciative of our blessings. I mean, when you constantly read how the world thinks you should be able to euthanize your baby, but your direct community celebrates and supports everything she needs, it makes fertile soil for deeper gratitude.


--- 2 ---
The break has been lovely. Scott took a chunk of time off and we did not travel. As a family, this was awesome. Last year we did not travel, but everyone got the flu.  Having Scott home, not traveling has been amazing. We had so much fun with his mom at Christmas and we spent the rest of the time just relaxing and enjoying each other and the nice weather.

We do love to travel and visit family. I think that is what was so special about this holiday. The kids woke up in their own beds, they relaxed, they didn't encounter germs with an over-tired, over-sugared system. The girls sang in the choir on Christmas Eve and we celebrated the New Year outside with our neighbors. It was delightful.


--- 3 ---
Let's talk Saint Joseph for a second. Did you know the traditional understanding of the story of Saint Joseph's reaction to the Incarnation was that he believed Mary was telling the truth, but was terrified to act as a caretaker for the Messiah? Yeah, me neither. So, when the angel says "Do not be afraid to take Mary as a wife." It's a message of support, of "You were chosen too, Joseph, you can do it!"

The reason this struck me so profoundly was because of the high rate of termination that babies with disabilities face. Most parents who terminate are ending a pregnancy they were ready to accept until the testing came back with a Diagnosis. I think most of these parents want what is best for their children and many are led to believe death is better than a life of pain. I wish they all had a dream like Joseph to remind them that they don't have to be afraid.

It also struck me because I have always rejected the comments about me having to be extra special to have been given a child with Down syndrome. I always see my kids as people that I needed because they call to be more than I was. And they are! But when I read about Saint Joseph, I realized that God did choose me, not just as a call forward to make better use of my talents, but also because He is trusting me to rise to the challenge. He picked me. Whoa.

--- 4 ---
Speaking of Mariana, we've experienced a small miracle. Two months in a row showed a slowing of her thyroid function. We went for a third test as a formality to get in with the endocrinologist sooner. If you can show a trend, especially before the age of two, they see that as a more pressing case. So, I took her for another blood draw, which is its own kind of hell now that she knows the routine. We sort of forgot about it over Christmas, and Scott finally called the geneticist yesterday. When Dr. P called back the news was, well, weird. Mae's function is better. Her T3 and T4 have normalized, and, though her TSH is still running a little high, it's coming down. This is not the usual pattern, even though your thyroid can have blips where its function can get wonky, her particular case is not the usual situation.

We are still going to get in with the endocrinologist, just because she does have Ds, my thyroid is wonky, and hers isn't acting exactly normal. I'm happy to add a specialist even though it is trying to fit one more thing into an already crammed schedule. I don't want to have to wait if things take a turn down the road.


--- 5 ---
Mae's speech situation is driving me crazy. She can talk. She speaks in sentences when she's frustrated. But most of the time, it's just babble. She doesn't request items, regularly label items or answer questions she can answer. It's a constant battle to get her to participate in a conversation, and she sticks with the familiar. The reason this drives me crazy is that her ability exceeds her willingness to do what she can. Okay, okay, so that is the human condition, right? However, there's a whole lot more riding on her development than usual. It can be a use-or-lose situation for her, and there is no way to communicate that to a 22 month old toddler. The fact that I have entertained the idea of trying to tell her this is just more evidence about how crazy I'm becoming. As usual, the only thing to do is hang it on the Cross and let Jesus work it out. Now what's the over/under that there will come a day when I complain that I can't get her to be quiet? 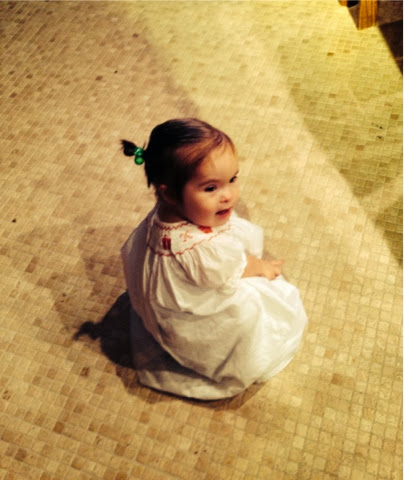 For more Quick Takes, visit Conversion Diary!
Posted by Barbara Fryman at 10:23 AM