Yes, I officially claim defeat on the Christmas card/letter. Tough. Here's the run-down of the Life of Fry.

Merry Christmas!
And I mean that sincerely. Because it's been a tough year, no? We had a baby, via c-section, which was terrible (the section, not the baby.) The baby, one Mariana Lynn, was born with Down syndrome and has since spent life defying odds, exhibiting stubbornness and illustrating the fact that "special needs" is a term that applies to everybody in the world.

Kate the Great received her First Holy Communion, went on a trip with Grandma and finally has lost all the "tooth fairy" teeth, which everyone knows are the non-molars. She's doing well in school with a little encouragement, sometimes a lot of encouragement, and she has quit guitar because she was "burnt out". Yep, my 8 year old claimed to be burnt out. Rather than argue with her I just welcomed her to the club of "Much Too Young to be This Damn Old". Lo and behold the child misses guitar lessons. Because I use all advantages, I'm making her earn them. Heh.

Charlotte was front-toothless for many many months and finally has one and a half front teeth. She rocked 1st grade and is really working hard in 2nd. She has had 100% 7 times in a row in spelling and I'm running out of bribes, I mean rewards. Luckily she thinks things like feeding the baby her solids are privileges. God bless the naive. Charlotte also made her First Reconcilliation, which nearly gave her an ulcer. She's been a true gem, which she admitted was because she doesn't want to have too many sins to tell the priest. She's a keeper.

Molly graduated from PreK, and I spent the summer worried that Mrs. Robinson was the only teacher that could handle her particular self. Over the summer she and I and the baby went to Houston. She is such a fun companion! Kindergarten came and Molly's teacher couldn't be better. Molly's reading very well. Her clean diet seems to help her attitude and energy and she's a little more compliant which is a lot of help. We do have bad days, but alas, we all have bad days, don't we? She and Paul are currently fighting constantly and spend a lot of time in separate corners. Scott and I spend a lot of time thanking God for separate corners.

Paul is now (FINALLY) four. This year he has grown up so much! He has some boy buddies with whom he can wrestle, fight and be a boy with. This is good for all of us in the house. He adores his baby sister and she helps ground him when he is particularly wild. He still wakes up grouchy, but he and Daddy are working on that. The good news is that he adores his teacher, the bad news is that he never wants to come home from school. The term "Mama's Boy" does not apply to him.

Mariana was born, baptized and has been spending the year nursing and ignoring the experts. She loves to eat, says, "Mama" and signs "milk, please" and "eat". The goal is 10 words by a year. I'm shooting for 15 only because I have a motivated student. The crawling thing is not really working well, but I'm hopeful she'll get going by mid-January. She does not like to do anything she perceives as work, and she's stubborn. In other words, she's like her mama.

Scott and I bought a new house, moved in October 20th, and proceeded to be exhausted the rest of the year. It's been one of those years where the unexpected is a constant factor in our lives. Luckily God has never let us down, and answered many many prayers, some that we never thought to express in words. Every breath we take has been a gift, and we are so very grateful. 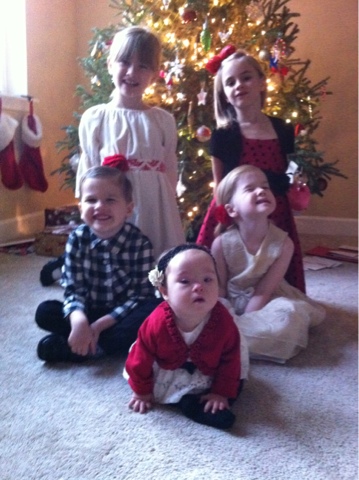